It’s been fifty years since George McEvoy bought and moved the Freeport Train Station to Boothbay. That purchase, driven by his mother’s ultimatum for the young George to remove his collections from her house, was the first of many acquisitions that has preserved a slice of Maine’s history for future generations.

Beginning around 1963, the young McEvoy began amassing a collection of railroad memorabilia that would prove valuable over time. The family home in Grafton, Massachusetts was filled to the rafters, and it appeared that the family’s Southport summer cottage was moving in that direction. Maine Central Railroad provided the answer, and opened the door to the creation of Maine’s only railway village. 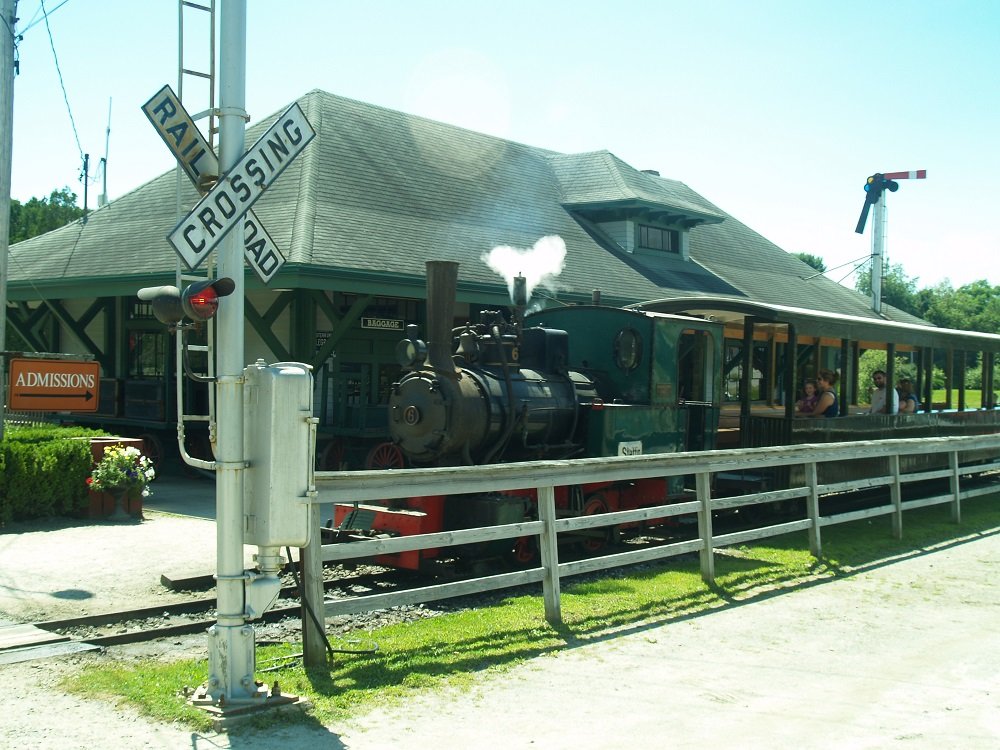 McEvoy was teaching in Bowdoinham at the time, and became friends with Phillip Carr, the station agent at Freeport. One day, intending to visit, the sign on the door stopped him short: the station was closing. When Phillip later told the young George that the station itself would be put up for sale, the notion of creating a Museum took hold in the back of McEvoy’s mind.

The historic depot had been built in 1912 to replace the one burned in 1911. It was of a style called “New York Central”, and was one of the newest in the state. During its heyday, the station managed outgoing and incoming passengers and freight coming and going from New England, national and global locales.

Just as visitors were beginning to visit Maine en masse for its fresh air and recreation, L.L. Bean was dramatically accelerating its shipments worldwide. Founded in 1912, by 1961, most freight had shifted to truck transport and passenger service had been discontinued, leaving only the US Mail its major client.

On January 2, 1964 Maine Central Railroad Officials announced that McEvoy had submitted the winning bid to purchase the historic station. McEvoy believes that he could not have possibly been the highest bidder, believing that the Railroad must have favored his plan to create a Museum with Freeport Station as its centerpiece.

Moving the station to the family’s Southport location was considered impossible. The 60×20 foot property exceeded zoning restrictions – it simply didn’t fit. McEvoy scoured the area, identifying the 15-acre parcel on Route 27 in Boothbay, where the beautiful Freeport Station found its home.

The real challenge? Moving the station 39.2 miles from its Freeport location to Boothbay, and over the Kennebec River in Bath on the old (now dismantled) Carleton Bridge.

“They said it couldn’t be done. The building was too big to move. It only made me all the more determined to do it,” McEvoy remembers. McEvoy had a plan, and he had the right contacts. As a foundation was dug and concrete poured at the site, Torben Anderson, of Maine Truck Owner’s Association, and Jack Ballard, of Kennebec Trucking, plotted the route. According to McEvoy, Anderson’s motive involved more than money: he aimed to demonstrate to the general public that trains were obsolete, that it would take a truck to move a train station.

The key was dismantling the building, and Frank T. Greenleaf of Westport Island sawed the building into a total of nine pieces, four for the structure and five for the massive roof with seven-foot overhangs. Even the bricks from the chimney were dismantled.

Over three days in 1964, on February 3, 4, and 5, 1964, the nine pieces were individually loaded, one at a time. In a total of nine trips, three per day, the piecemeal property crawled at a snail’s pace on the backs of flatbeds up Route 1 to Brunswick, Route 24 through Brunswick, back to Route 1 through Bath and Wiscasset and finally to Route 27. State Police Troopers accompanied the entourage, stopping traffic and guiding the way. According to legend, the employees at Bath Iron Works all left their stations to come watch the spectacle of the huge pieces narrowly clearing the bridge at one time with just two inches of clearance. Once in Boothbay, the building was re-erected where it remains today.

When it opened to the public in 1965 it became Maine’s first public railway museum. 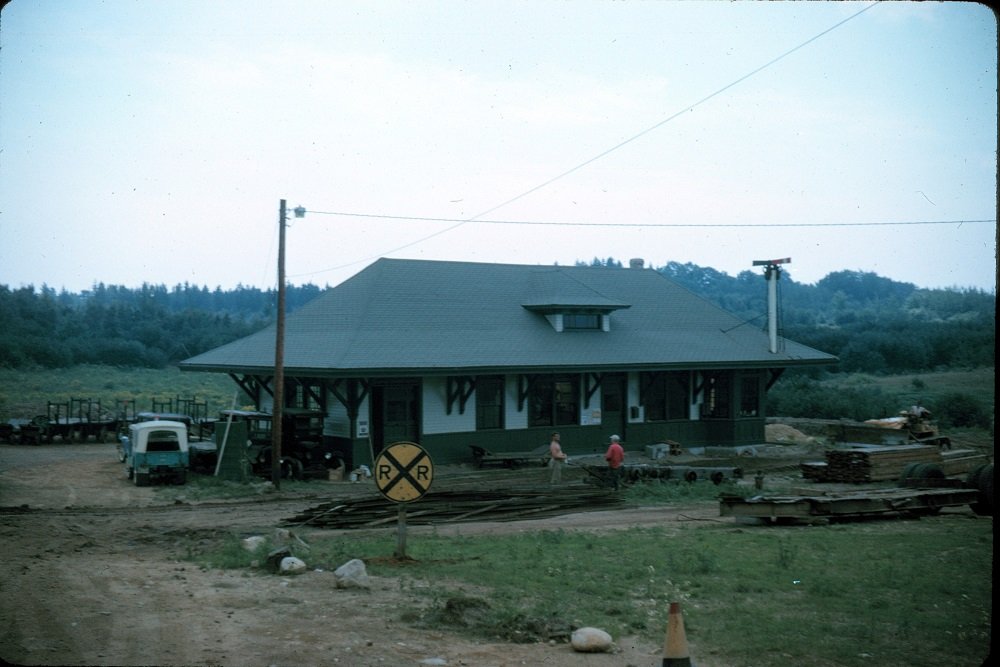 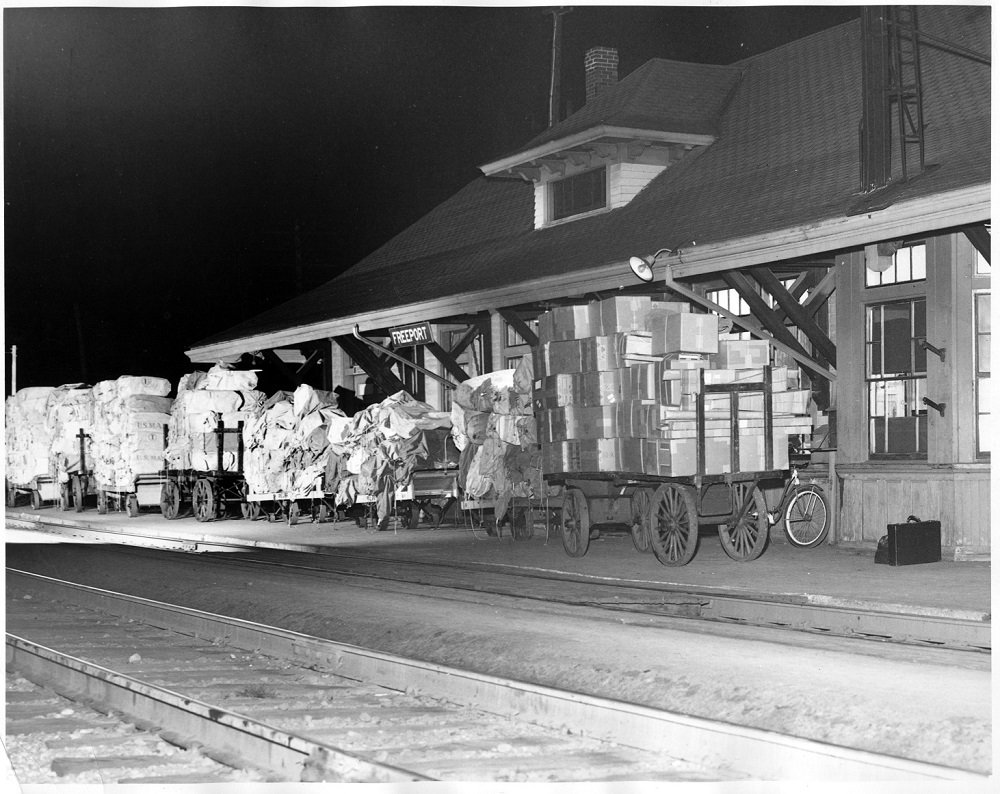 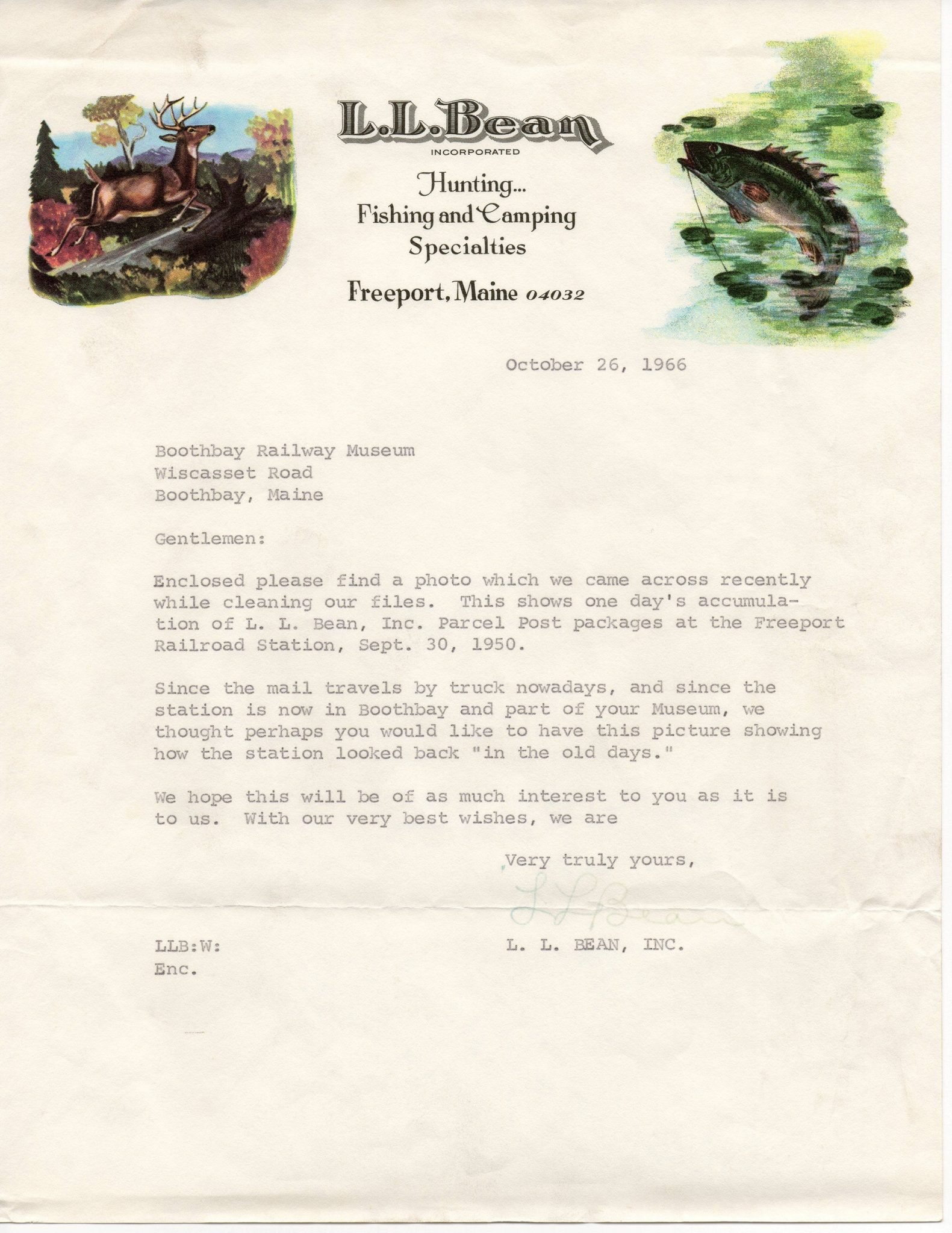