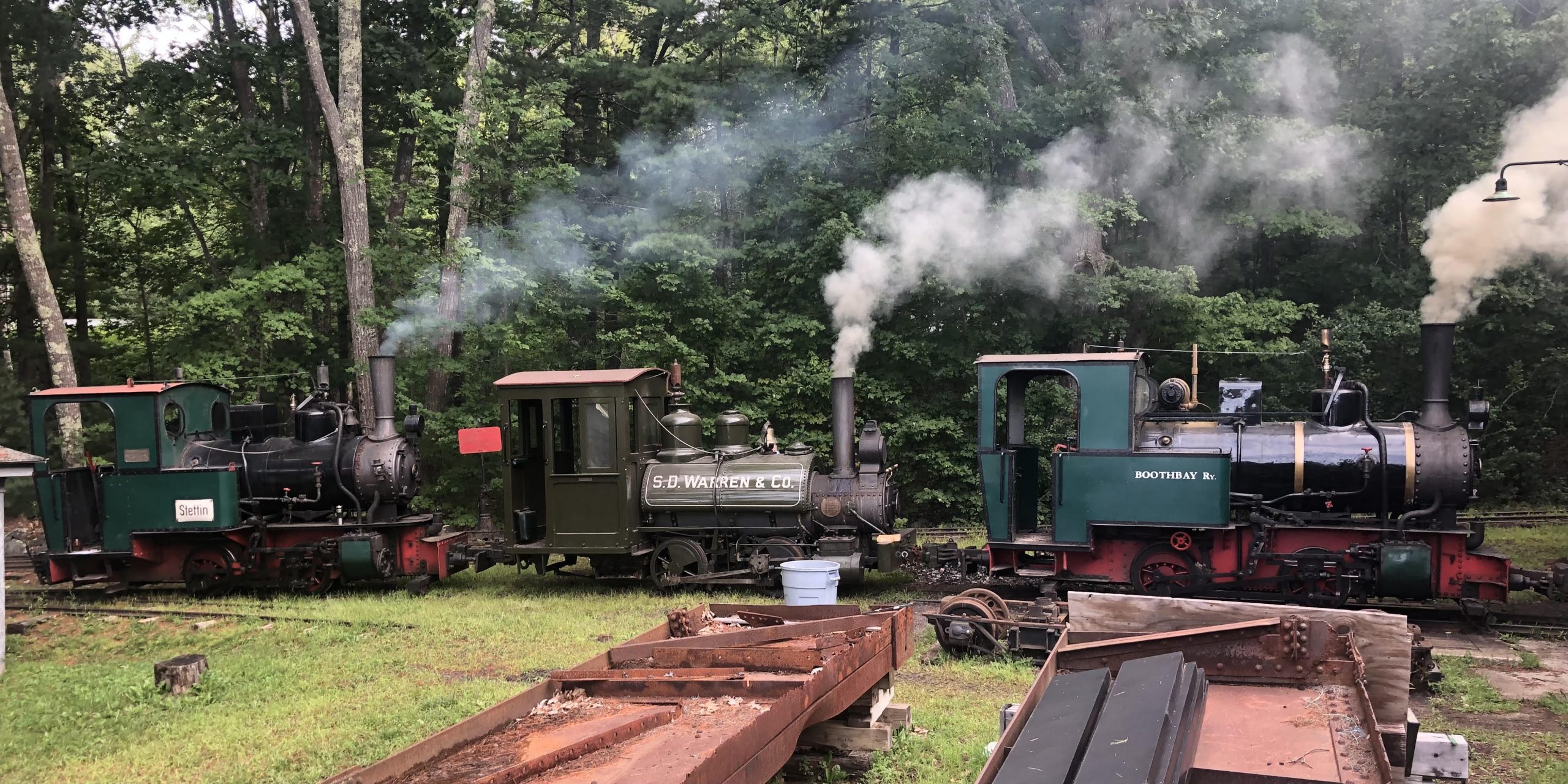 This picture with the locomotives all fired up was for the operational inspection The boilers are inspected twice a year. The first inspection is done with the boilers drained so the inspectors can do a internal inspection, they check the condition of all of the internal parts. Later on they want to inspect the boilers, and steam lines when they are up to operating pressure and temperature. John Orne, Engineer

by Dick Forrest, Engineer in Charge

The second phase of the inspection is what is called an operating inspection. The boilers are brought up to temperature and pressure. The inspector  checks that there is no steam or water leakage anywhere on the boiler and all pressure joints are tight and leak free.
In addition, pressure is raised to cause the safety valves to open and relieve steam pressure. The safety valves must function to open at the right pressure and stay open long enough to reduce the steam pressure to a specific amount and then close and be leak tight.

A photo (source unknown) of a Baldwin locomotive ”back in the day.’

Around 1895, the SD Warren Paper Mill in Westbrook bought 3 two foot gauge locomotives from Baldwin Locomotive Works. They were a standard design from the company’s catalog. The mill had about 30 miles of track from a transfer connection with Maine Central. The locomotives moved pulpwood and other materials around the mill as well as carrying finished paper to the MEC transfer point. Locomotive 3 was destroyed in an accident when a trestle collapsed.
IN the 1930s, the mill installed a conveyer system to replace the locomotives, and they were placed in storage. When World War 2 started, replacement parts for the conveyor became scarce due to rationing, so the locomotives were put back in service. After the war they were sold to an amusement park. That is where they were when George H. McEvoy bought them.
Locomotive 1 is in the static display at the top of the hill near Thorndike Station. For years #2 sat under the sign next to Rte 27. One of the shop guys was checking it for parts, and pulled the cylinder heads to check their condition. He found they were in pristine condition, and that is when the idea of restoration was born.
The restoration was completed mostly volunteer labor.
As a side note, a couple of years ago there was an article in Narrow Gauge and Shortline Gazette about 2 foot locomotives used in the sugar cane fields in Hawaii. Many of the ones pictured looked identical with our Baldins; some were larger.
George Paine, BRV BOD
Quote from George H. McEvoy September 21  – ‘Just last week we had a fellow come out from Minnesota, whom I know, and is a railroad equipment consultant. He spent all day touring the Museum and going over our equipment with the operators. He was extremely impressed with our whole operation! We placed an order for some needed parts for him to supply. One is a second steam lubricator, exactly like the one in use on the Baldwin Engine #2, presently restored and in our shop. Since this part is so very rare to find, we have decided to order a second one just in case. It is the desire of the operating staff to run this Baldwin #2 on various occasions throughout the year, making it a special event when it is in use. It is a very rare piece of railroad equipment that was used in The State of Maine years ago!’

ARCHIVING OUR PAST BY BUILDING OUR FUTURE