Jim Kearney set up his first shop in 1976 and has been forging as his vocation ever since.  He started blacksmithing as a hobby while studying at the University of New Hampshire, and realized that hand-work was far more rewarding than any other endeavor that he could conceive of.  To further his education in blacksmithing he worked and studied in Ireland, focusing on general, rural blacksmithing, and in Germany where blacksmithing is regarded as high art.

Work from Jim’s shop includes the forging of stone working tools, of rigging hardware for sailing vessels, and of fine architectural hardware.  He has been a member of the League of New Hampshire Craftsmen and the Artist Blacksmith Association of North America.  Jim Kearney has exhibited work at the Smithsonian Institution in Washington, D.C. and in galleries across the country.  After blacksmithing for forty years his arm is still okay and he is still learning. 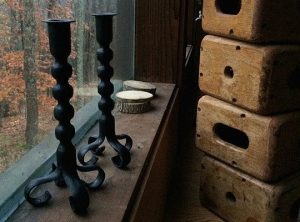