Twining is an ancient technique, possibly 25,000 years old, used in basket-making and weaving world-wide.  Over a century ago twining began to be used to weave rugs.  Twined rugs are made on upright frames, and resemble braided rugs.  Making rugs from rags became popular during the 19th century with the industrial production of cloth.  It was a popular household craft in America until the beginning of World War I.

Rebecca Townsend is a fiber artisan and a Maine native. She’s had a lifelong interest in fabric and fabric related projects. She’s been making twined rugs for several years on a frame made by her husband. She loves the craft because of the connection to our history and to a time when it was a necessity to recycle everything in the home.

Rebecca will be at the Village on: 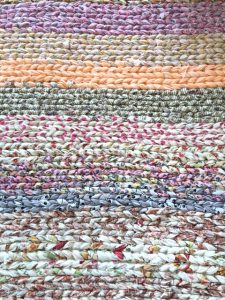