The origins of lacemaking are unknown, but lace became immensely popular among the very wealthy during the Renaissance.  It was extremely expensive and highly valued as a symbol of status.  Although frowned on by Puritans, many Americans prized lace and in Ipswich, Massachusetts hand-made bobbin lace was produced from the 1750s to the 1840s.  With continued immigration from Europe, lacemaking traditions spread across America and have been handed down from mother to daughter for many generations.

Watch Vi work her magic at the Village on: 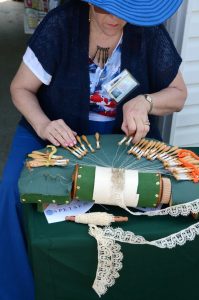