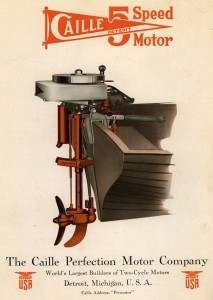 Caille, from the Library of Congress

The recently renovated Antique Engine Display includes nearly 200 carefully curated outboards donated to the Museum by Larry Stevenson. The collection includes a very rare 1930 Caille Red Head Model 36 motor with electric start, Clarke Troller, a WWII Evinrude Storm Boat Motor, a West Bend 80 hp Tiger Shark, Evinrude Row Boat Motors, a 1904 Wonder two stroke inboard engine, Fageol 4 stroke outboards, a Fageol VIP pod drive, a WWII generator set and a two man chainsaw made by Mercury Kiekhaefer, the first outboard model made by Johnson, a 1938 Johnson “Sausage Tank” motor, and dozens of others.  The gift also included a large collection of outboard ephemera including advertising, manuals and other documents. Some of these items will also be on view. The Museum plans to digitize many of them to make them available for researchers in the future.

His gift will join with the Museum’s outstanding collection of early inboard marine, hit-and-miss, steam and internal combustion engines which tell the story of how technological advances influenced both work and home life for Mainers from the mid-nineteenth to the mid-twentieth centuries.

Larry will be offering a series of educational lectures throughout the summer at the Boothbay Railway Village as well as training for volunteers interested in hosting the exhibit as docents.  See the event calendar for these opportunities.

The Antique Engine Exhibit renovation was made possible with support from the Mildred H. McEvoy Foundation and these business supporters:

Love & Outboards: The Story of a Romantic Gift to the Boothbay Railway Village

At first glance Larry Stevenson’s small frame and reserved smile might cause you to underestimate his physical strength and his mental fortitude. Once you get to know Larry you understand that while he can physically maneuver a 250 pound outboard engine, it’s the weight of his wife’s nine-year battle with ovarian cancer that most informs his character today.

Larry met Jane Barcalow when they were still just teenagers in Michigan, attending Adrian College.  After falling madly in love, Larry enlisted in the Navy, and after Jane graduated, they got married.  Their first duty station was at Winter Harbor which introduced the two to Maine. They then spent two years with the Navy on Guam.  After the Navy, Larry started working part time for UPS while completing university. He worked as an unloader, sorter, part-time supervisor, driver, and Industrial Engineering supervisor, progressing to the post of International Industrial Engineering Manager, responsible for all the countries outside the U.S.  He and Jane lived all over the US, Germany, the U.K. and Belgium during his time with UPS while raising their two children.  In 1987, they purchased a summer home in West Boothbay Harbor, and when Larry retired in 2000, they settled in Sequim, Washington for the winters, where Larry served as a Coast Guard SAR Controller, Group Duty Officer, Vessel Examiner, public education instructor, and motor lifeboat crewmember at Coast Guard Group Port Angeles, WA.

It was in 2004 when Jane’s diagnosis and treatment for Stage IV ovarian cancer, would cause Larry to look for some diversion to fill the hours he spent caregiving by her side while she recovered from chemotherapy.  Larry found himself looking back to his Michigan childhood for comfort and inspiration.

Larry on Cat Lake in the Sears rowboat he bought, running his second engine, a 5 hp 1948 Scott Atwater.

He had grown up outside of Detroit, Michigan during the post-war boom time of the 1950s. His summers were spent in a cottage on Cat Lake, near Mayville, Michigan, enjoying time with his family including boating and swimming. When Larry was just 12 years old he set out to earn enough money to buy his first outboard. After mowing lawns for weeks, he had just enough to walk the ten blocks down to the local sporting goods store with his Radio Flyer wagon in tow behind to purchase a 1947 2  1/2 hp Sears Elgin. It was his “Rosebud,” the very first possession he ever bought with his own money.

During the days of Jane’s aggressive cancer treatments Larry spent hours researching and buying hundreds of outboard motors on eBay and through other websites and classifieds. He would pay for them and ask the seller to hold his purchase until he was able to arrange for their pick up.

In 2006 Jane went into remission and the pair set off on a cross-country journey to pick-up his nearly 300 outboards in a Penske 26’l box truck. They left Washington and traveled through 20 states and across 6,500 miles. They filled the truck more than once and had to deadhead from Niagara Falls to Maine to unload before setting out again.

The trip brought Larry great joy, both for time with Jane enjoying life and the warm memories of those summers on Cat Lake. His joy would be short-lived. Soon after the journey, Jane’s cancer returned and the following years found Larry heart-broken as he could only watch, and nurse and comfort her, as she succumbed to the cancer and left this world on November 14, 2013.

Larry’s collection was divided by a continent, just like his living arrangements. After Jane passed, it became clear to Larry that the outboards were only objects and that the joy he had felt in amassing them with Jane would only be recaptured by sharing them with the public. Larry shared “I tried offering open houses and the occasional lecture on both coasts but I really felt like the best place for these outboards was in the public domain, where the most people would benefit from them.”

His first gift went to the LeMay Family Collection in Tacoma, Washington. The more than 200 gifted to that Museum include Larry’s “Rosebud,” that 1948 2 1/2 hp Sears Elgin.

Your gift supports our mission to conserve, display and interpret artifacts, authentic period structures and technologies utilized in Maine during the historical period of the Mid-19th through the Mid-20th Centuries.
INVEST